I could talk to you endlessly about the Territorial Imperative of Space Migration. 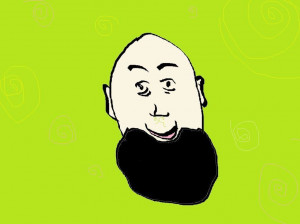 It is December 31st – Clothes exchange day. Rei Hanamaru stops in front of an abandoned slaughterhouse. Posters of a two-headed pig cover the walls. The posters read – “Join the conjoined pigs, Broody & Moody”. A bird – the smallest she had ever seen – lands on a trash can lid. In a back alley, she sees a sewer entrance. Empty boxes of pizza and computer components are lying around. She climbs down the sewer manhole and the moon tears the clouds.

When they were children, Rei and Gabriel were extremely close and shared everything. For instance, they shared a love for Japanese cuisine. Their favorite dish was sushi, and they were both bad at preparing it. Rei and Gabriel were so close they even shared their imaginary friends, and this seemed to them the most natural thing in the world. More natural than kissing, or stretching in the morning. Broody & Moody were their best shared imaginary friends ever. They could dream simultaneously, speak like a misunderstood literary genius and make time stand still. But only for them. Rei and Gabriel shared their clothes, too – but only on Clothes exchange day. The suburb they lived in was pretty uneventful. As uneventful as asking for directions to the nearest coffee shop, in a town with only one coffee shop. Rei’s father was unemployed and lived in the basement, where he fixed clocks. For some reason, her mother avoided talking about him and went so far as to forbid her to see him in the basement. One time, however, when her mother was working, she descended down the stairs leading to the basement; standing on tiptoes in front of a wooden door with an hourglass etched on its surface so she could reach to the lancet window, she managed to catch a glimpse of a dim room with different cogs and wheels scattered on the floor and a man – or rather, a back of a man – leaning ominously over a large desk.

“My father is a back of a man leaning ominously over a large desk,” would later conclude a ten year old Rei in her Revolutionary Girl Utena cover design diary. That day, around midnight, while she was getting ready for sleep, her father came to her room.

“No human being has truly finished building a clock,” he whispered.

“Originally, clocks were not meant to measure time,” he went on in a wavering voice.

Rei had never talked to her father before – and was extremely confounded.

“Is that how a father is supposed to look?” she asked herself. “An itchy nose, a shaggy beard, a pair of bulging eyes, an insecure voice, obsessing over clocks – are these the ingredients that make up a father?

The twisting corridors, like the entrails of a sleeping beast. Rei arrives to an elevator. Someone scribbled a graffiti of a small hourglass on one of the rusty doors. She enters the elevator. A song starts playing. Leonard Cohen. Dance me to the end of love. The elevator plunges into the abyss. She remembers the first time they celebrated Clothes exchange day.

It was December 31st. Rei’s mother was away on business. Gabriel was in the hallway. They swapped clothes and then listened to Leonard Cohen’s Dance me to the end of love – one earbud each.

“You know, I once masturbated to this song”, Gabriel said. “Don’t know why, it just felt the right thing to do at the time.”

“A victory over conformity”, replied Rei. “You are a true pioneer!”

They wanted to celebrate Clothes exchange day making sushi and went to the kitchen. Gabriel was wearing a heart sweater, a rosette skirt, striped socks and boots. Rei was wearing a black checkered shirt, a beanie, jeans and sneakers. Hanging by a rope from the ceiling, Rei’s father wasn’t wearing anything. No one had told Rei what was expected of a girl when she sees her father hanging by a rope from a ceiling, so she just stood there, hoping that something meaningful will come of it. Gabriel tried to do a word association exercise in his head. However, he could only think of names for babies.

The elevator doors open. Rei enters a circular room with two old armchairs on each side of a circular table. A table full of sushi. Chirashizushi, Edomae Chirashizushi, Gomokuzushi, Nigirizushi, Gunkanmaki, Inarizushi, Fukusa-zushi, Chakin-zushi, Makizushi, Futomaki, Hosomaki Temaki, Uramaki, Narezushi, Funa-zushi. And the Sushi to end all Sushi – the golden Maitreyazushi. Gabriel told her that Maitreyazushi is the sushi you eat with your loved ones on the day the world ends. On the opposite side of the elevator, there is a screen printed window on the torn tapestry that decorates the room. The room is a play kitchen made out of cardboard boxes; it is supposed to resemble the kitchen from Rei’s childhood home. Gabriel calls it the The Kitchen version 2.0. Gabriel is wearing a heart sweater, a rosette skirt, striped socks and boots. Rei is wearing a black checkered shirt, a beanie, jeans and sneakers.

“So, my parents just died in a car crash”, says Gabriel as he poures sake into a tokkuri and places the flask in a pan with boiling water, “and I’m not sure how to feel about it. Both at the same time.”

“This disproves my theory that mothers living longer than fathers”, says Rei. “And I’m sorry.”

Gabriel pours the warmed sake into an ochoko and gives the cup to Rei.

“That it disproves your theory?”

Rei pours the remaining sake into another ochoko and gives the cup to a smiling Gabriel.

A part of the tapestry hangs like a peeled skin. Every year it’s the same. Ever since her father’s death. They meet in the sewers. Every time, a different section of the sewer, every time, one of them chooses the meeting place and sends an invitation card. They meet in the sewers and talk about the end of days, and they talk about making the world a better place – and how they will fail at making the world a better place. They never mention her father. They keep things simple – with joy and laughter and the obligatory foul up of the countdown to New Year.