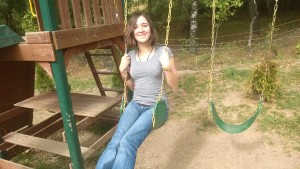 The fluffiness of the carpet smothered the sound of his boots. As he switched on the tall lamp in the living room, it gave out a pleasant click that shot the silence and made the bulb bleed dim light. Having removed his leather jacket, he threw it on the nearby armchair. The gesture made him slightly dizzy. He shut his eyes while the universe performed a U-turn and he waited for the world to fall back into its place. The sound of his own pulse resonated in his ears and he could feel a fist angrily pounding from behind his rib cage.

“Have no worries, whoever you may be”, he thought, “I’ll let you out soon enough”.

The familiarity of those green walls made something fold inside him like an origami bird. Approaching the bookcase, he rested his eyes on the framed photograph and examined the faces that smiled from behind the glass. He could feel the exiling breeze of a chasm that had parted its lips between him and the world but nevertheless, he tried bridging the gap with his fingers. He was just a ghost that knew its touch could not reach this realm of the living where she belonged. The note that hung from the frame did not bother him as he stared at the woman’s long strands of sun bleached hair. In the picture they walked hand in had on a beach while she clutched her straw hat, out of fear of having it stolen by the wind. They gazed at each other through round over-sized sunglasses. A freshly torn gash emerged in his chest and life exhaled through it staining the fabric of reality like nicotine on a white sheet.

The rest of the bookcase appeared alien to him, the titles on the books seemed foreign and unreadable. A plastic plant stood on the coffee table, next to a furniture catalog.

Turning around, he sat on the white couch and sunk in it. “A good couch always takes some of the pain away” he thought “No matter how troubled one is, he can’t resist the warm feeling of coziness that imbibes the body when sinking into a comfortable piece of furniture”. At least that was a good choice he had made. Allowing himself a brief moment of relief, he contemplated the importance of cozy couches in the universe. He then reached out and pulled out a Glock from one of the pockets of his jacket. He bit into the muzzle and pulled the trigger.

A multitude of gasps raised from a multitude of chests at once. Seconds later, a lady or two began to scream. People in uniforms rushed only to find the blood splatters staining the immaculate white of the cushions.

IKEA had to be closed for the rest of the day.